Fumiko. A sorcerer-princess and the head of the Scarlet forest clan. Her subjects knew her as a wise and magnanimous ruler, her allies – as a calculating and cunning strategist, and her enemies called her nothing short of «foul witch». Although they did so very carefully and quietly, when no one who could listen in was about. Few knew how exactly the princess came to acquire her current position. Perhaps the warrior-poet Takumi, who noted down the biographies of all notable kitsune, did, but that scroll was locked away and not for the public eye.

Although Fumiko was born in the family of the clan leader, she had no chances of inheriting anything. Even considering the fact that kitsune (unlike the foolish barbarians) women inherited as well. The future did not offer many opportunities for third daughters. In the best of circumstances – an arranged marriage for diplomatic ties, in the worst – a pariah in her own family, a burden, which others try not to notice. That said, such a status afforded Fumiko certain advantages. While her sisters studied the art of calligraphy and poetry, playing the shamisen and other noble pursuits for days non-stop, the princess could walk on the grounds of the manor undisturbed and listen to the conversations of elders and form her own picture and understanding of the world. 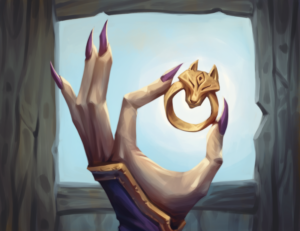 The picture that formed was not very bright. The Scarlet forest clan was losing influence with each passing year, those that came to power were weak, senile old men with little ambition, who would not allow the young and strong to power, and backward traditions halted any attempts of modernization and progress. Petty bickering and the intrigues of the elders waded on for decades, spreading the decay upon the entire clan like molded tofu spreads it upon its still fresh neighbours. Already in her teen years, Fumiko understood that her elder sister will take her rightful place in the line of unremarkable leaders, which will further weaken the clan. But what could she, a young fox, with the status slightly higher than that of a kotatsu-table possibly do about it? Not to mention – without any education or special talents? Thankfully, Fumiko had one quality which evened out the playing field – her undying ambition.

The future princess fled from home after her genpuku – coming of age ceremony. In the evening she dressed in her first adult kimono, dyed her teeth black and shaved her eyebrows, and at night she was already climbing down from her bedroom via a rope, made of the very same kimono. Beyond the palace grounds a few of her accomplices awaited her – loyal servants, who shared the outlook of their mistress on clan matters. Under the cover of night, they got through to the port and hid on one of the few ships sailing between the Sunrise Islands and the Continent.

As they travelled upon the Continent, roaming amongst the unfamiliar streets of unfamiliar towns, speaking with foreign gaijin, Fumiko learned a few things. First of all, birthright and ancient traditions do not mean as much as she was taught during childhood. A good leader does not have to come from a noble bloodline and know the finest details of the tea ceremony; the world is ruled by intrigue, bribery, charisma, and cunning. Second, the external world is far more complex and dangerous than the snobs of the Sunrise Islands have grown accustomed to think. With every month of her journey, the princess understood more and more that what protected the Sunrise Islands from invasion was mostly pure luck and the fact that for now, the Continental powers preferred marauding their neighbours rather than venturing across the seas for loot. But if for some reason, the gaze of one of the local warlords would turn to the Sunrise Islands, they would be doomed without a strong leader. But one does not become a leader on mere ambition, she needed resources. For such a resource, Fumiko chose magic. Or rather, magic chose Fumiko.

It was a casual rainy evening, somewhere in the forests of the Continent. For her lodgings, Fumiko chose a large dry cave, having completely ignored the small altar in the shape of a two-headed serpent in the corner. That night, the princess had a dream. She stood upon a tiny island, the water around was boiling and black, and smelled of rotting flesh. Half-decayed corpses floated up with the bubbles. 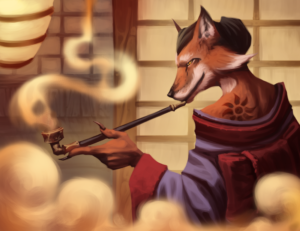 – What is this? – Fumiko was calm in her dream, though were she awake, such a scene would have shocked even her, despite the many unpleasant things she had already seen.

– This is plague, my child. – Only now did the princess notice that she was not alone on the island. A two-headed serpent brushed its tail upon the water, and where its scales touched the surface, the water seemed to grow clearer for a few moments.

– God? Demon? Child, these are words created by mortals. You may call me by my old name – Kiri-sh-Tey or by my new one – Kame-Onna. In the end names are merely words.

The serpent made a sound which could be interpreted as laughter.

– Chosen? Fate? Child, you are the weaver of your own fate. You may save the world, and you may disappear in obscurity, just as thousands and hundreds of thousands of other mortals before you. You merely fell asleep upon my altar, that is all.

– But how can I weave my fate, when I have neither knowledge, nor wealth, nor influence? – The serpent, the black water, all this began to melt, and Fumiko woke up.

– Knowledge can be acquired, wealth – taken or earned, influence – earned with your deeds. Find me, child. And, perhaps, I shall share with you, the first item on that list. 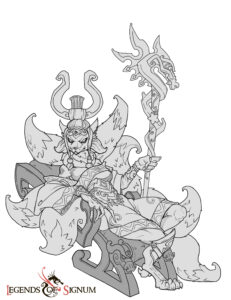 After this dream, the princess-kitsune had a goal. To find Kame-Onna, acquire knowledge, return to the Sunrise islands, take leadership of the clan and protect her clansmen from the coming threat. And then, as the head of the Scarlet Forest clan, spread its influence upon all the Islands. For who but she, princess Fumiko, can protect her country from outside threats?

The altars of Kame-Onna were spread across almost the entire Continent, often hidden in caves and impassable jungles. But after the first contact with the entity, it seemed as if the princess acquired something akin to an inner compass, which always accurately indicated the locations of the shrines. The cult was not particularly popular, and the serpent itself did not desire worship. As the deity explained eventually, during one of the now regular dream conversations, it did not desire power. It saw a great potential in young Fumiko, a powerful ally and a future link to kami of the Sunrise Islands themselves. It was the serpent that advised the princess to seek the favor of a god well familiar to the island inhabitants. For instance, Inari or Amaterasu.

With the help of the ancient deity’s knowledge, Fumiko acquired a pair of powerful magical artifacts: a fan, which created illusions, and a greenstone pendant, which granted regeneration. Once she returned to the Islands, she learned the skill of teleportation. All this, in addition to the accumulated experience during her years of travel, helped the princess quickly and relatively peacefully take over power in the Scarlet forest clan. The first step of her ambitious plan had been made.

Tags:
Kickstarter, kitsune
Newer The avatar of Inari
Back to list
Older Our Kickstarter campaign was funded in 2 hours

The gaijin came to the village from the east. Disregarding all the rules of honorable warfare (what else can one expect from the baka-g...

END_OF_DOCUMENT_TOKEN_TO_BE_REPLACED

The thick fog of sedition The wind attempts to disperse Foolish The warrior-poet Takumi slowly stroked his brush upon the parchm...

END_OF_DOCUMENT_TOKEN_TO_BE_REPLACED

All the news, Signum Chronicle

The shooting tournament of Takagi province gathered various archers from many noble families. Though, one of the participants cle...