The gaijin came to the village from the east. Disregarding all the rules of honorable warfare (what else can one expect from the baka-gaijin), they set fire to two houses with peacefully sleeping villagers, at dawn. Then, once panic began and all the villagers ran to put out the fire, the vandals broke into the temple and ransacked it for anything valuable. The monk who was unfortunate to be praying to Inari at the time, was beheaded on the spot.

After a few days, the foreigners repeated the same trick on another village. Arson and looting. This time, however, the villagers noticed the wrongdoers and attempted to stop them. As it then turned out, the newcomers from the Continent were equipped better than regular farmers and, unlike the latter, were familiar with various battle tactics, which they islanders had not seen before. Several units of old, but still functional gunpowder weaponry, along with long-range arbalets left the villagers, armed with pitchforks, and in the best case scenario with their rusty grandfather’s blade, no chance.

The chain of villages, looted by the Continental barbarians grew with every week. The gaijin cunningly used the chaos left in the islands by the Cataclysm. The regular army was occupied closer to the capital, subduing disorder, the nobles squabbled for power, and the small seaside villages were left to fend for themselves. One might ask – what could poor peasants possibly have of value? A bowl or rice? But the marauders understood that wealth should not be sought out in the villagers’ homes, but in their temples. Not fearing divine retribution, they carried out gold-plated statues and donations, they broke holy images, so that they could fill their pockets with another precious stone. At first, the raids were cautious, the raiders tested the waters. But by the time they reached the fourth village, two dozen armed bandits approached in broad daylight, without even bothering to hide themselves. 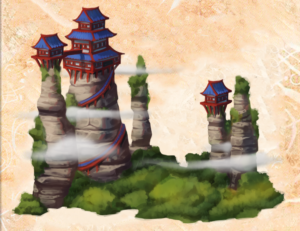 At the fifth village, the interlopers, emboldened by their impunity, decided to not even bother themselves with loot. They welcomed themselves to the main and only square; a fidgety lad, who looked like a mountain monkey, stepped out from the crowd, spat in the well and with an unexpectedly low voice yelled out:

– Hey you earthworms, we’ll be back in a week! If you lay down everything valuable that you have by this well, then we’ll spare your homes and lives. If there’ll be nothing – blame yourselves afterwards!

– Have mercy, my lord, we are poor as mi… – The peasant who spoke up did not get a chance to finish his sentence. He dropped dead in the dust with a crossbow bolt between the eyes, and the bandits headed back towards their camp chuckling.

The villagers began panicking. Some offered to gather what they had left and run, others – to call their neighbours for help. But the village wasn’t chosen by the bandits at random. Mountains stretched for many miles and even the fastest and fit youngers could not manage to call for help in a week. As for escape – the village had too few women, children, and old men who would probably not survive a long, tiring trek.

It was then, that one old man recalled an ancient monastery beyond the river. Kitsune-monks did occasionally leave their abode to refill supplies, but beyond that did not communicate with the laymen. There were many rumours of what transpired behind their stone walls, but no one knew for sure. After deliberating on the matter, the villagers decided to send a delegation with gifts  to the monks and a request for help.

When the delegation returned, the villagers despaired even more. The monastery sent three kitsune and only two had weapons. This looked more like mockery, rather than help. The monks introduced themselves as Kyoshi, Naoki, and Shinko, and immediately began teaching the peasants how to erect defensive fortifications. They looked like numerous ditches and canals, which were then filled with water from the river. On the sixth day, the field in front of the village looked more like a rice field, ready for planting, rather than a field for the future battle. The peasants were puzzled, but continued meticulously following their instructions, hoping for a miracle. 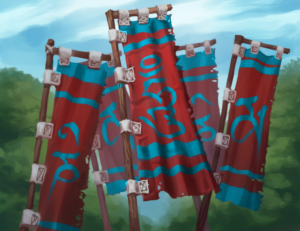 The bandits showed up on the horizon on the morning of the seventh day. Kyoshi was the one to meet them, with his sword tilted forward, Naoki with a bow, and Shinko with bare hands. Behind the monks ten of the strongest farmers crowded together, equipped with outright garbage.

– Hey lads, look at this, these fools dedicated to drown themselves! They even brought monks to do their funeral rites. Dolts! But so be it, we’ll kill their holy men last – With these words, the bandits took out their weapons…and then the miracle happened for which the villagers prayed to the gods every evening.

Simultaneously, the monks threw their arms up in the air, made several complex handwaves, and three ghost carps rose up from the water before them. The water spirits glittered majestically on the sun; neither the bandits nor the kitsune from the village could draw their gazes away from them.

Kyoshi was the one to break the entrancement. In the blink of an eye he mounted a carp, flew to the loudest bandit, who declared an ultimatum to the village, and sliced off his head with a practiced movement of his sword. After that, another miracle happened. The carp swinged its tail and doused the bandits with water from the canal, making their gunpowder weapons useless. While the dumbfounded gaijin unsheathed their knives and swords, arrows were already flying at them from Naoki’s bow. When the arrows ended, the monk also mounted a carp and dashed into the battle. Two monk swords now danced amidst the bandits. The last to enter the battle was Shinko. There he was – standing at the edge of the battlefield, watching it unfold, and in a blink of an eye, he was now next to Naoki, helping to fend off the enemies. The villagers raced into the battlefield after the monks. Had they clashed with the bandits in an even battle, they would stand no chance. But the element of surprise, the assistance of the river spirits, and the loss of the gunpowder weapons evened out the chances. 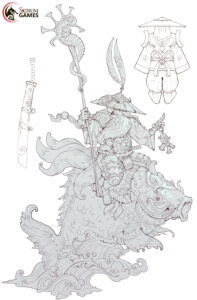 The monks were not invulnerable, they were wounded with swords and daggers. But Kyoshi’s wounds healed much faster than that of an ordinary kitsune, while Shinko summoned spirit foxes to aid him in battle, who knocked enemies off their feet and prevented them from fighting properly.

The battle ended with the victory of the villagers. The final bandit fell into the quagmire of blood and water, which the battlefield had become. The villagers lost only three men. Another three expressed their desire to study at the monastery. The fastest and sturdiest was sent beyond the mountain – to the Scarlet forest clan, of which princess Fumiko was said to have promised peace and protection to the Sunrise Islands.

Fumiko. A sorcerer-princess and the head of the Scarlet forest clan. Her subjects knew her as a wise and magnanimous ruler, her allies ...

END_OF_DOCUMENT_TOKEN_TO_BE_REPLACED

The thick fog of sedition The wind attempts to disperse Foolish The warrior-poet Takumi slowly stroked his brush upon the parchm...

END_OF_DOCUMENT_TOKEN_TO_BE_REPLACED

All the news, Our Releases

New set is on sale now!

New set is on sale now. What story does it tell us? Buy new miniatures in one click!   Set includes: White Witch Hunter E...